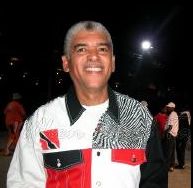 In typical BBC style, the British network interviewed Ray about pan and his role in developing the art form. The context presenter Jo FIdgen used in an edition of the BBC program Outlook, was go look at the violent clashes that occurred in the early days of the steel band movement. Outlook's Nicki Paxman interviewed Ray at his Woodbrook home, and he played his mellow double seconds for her.