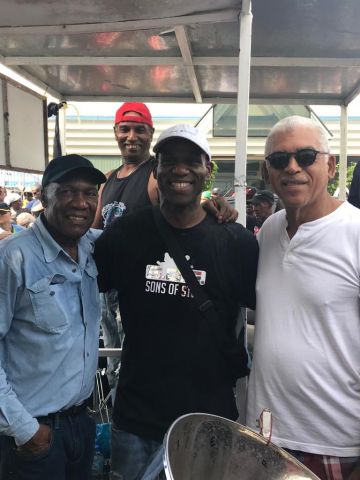 For the third straight year, Ray Holman will be the chief adjudicator at the UK National Steelband Panorama Competition in London. This year, eight bands are expected to compete, playing a ten-minute composition from memory, Saturday, August 24. Last year’s winner Mangrove will face stiff competition from Ebony, a perennial winner and Pan Nation steel orchestras. The competition will be held at the Emslie Horniman Pleasance Park.

Ray has acted as an adjudicator for many pan competitions, starting with the high school competitions in Trinidad. He has also judged competitions in the United States, where he has been conducting workshops at various colleges and universities for the past 20 years. Anise Hadeed, a protégé of Ray and now a renowned arranger and composer, will also be a judge at the competition.

The UK National Steelband Panorama is part of the Notting Hill Carnival, Europe’s biggest street festival that attracts close to one million visitors annually. It takes place August 25 and 26. in the Royal Borough of Kensington and Chelsea. It is organized by West Indians living in the UK. In 2006, the United Kingdom added the Carnival to the famous list of icons of England.